Anniversary of Selma march reminds us how democracy is defended

African Americans won the right to vote because we and our allies marched for it, demonstrated for it, were beaten and died to gain it. After Selma, people of conscience demanded that the country live up to its Constitution and its democratic ideals. 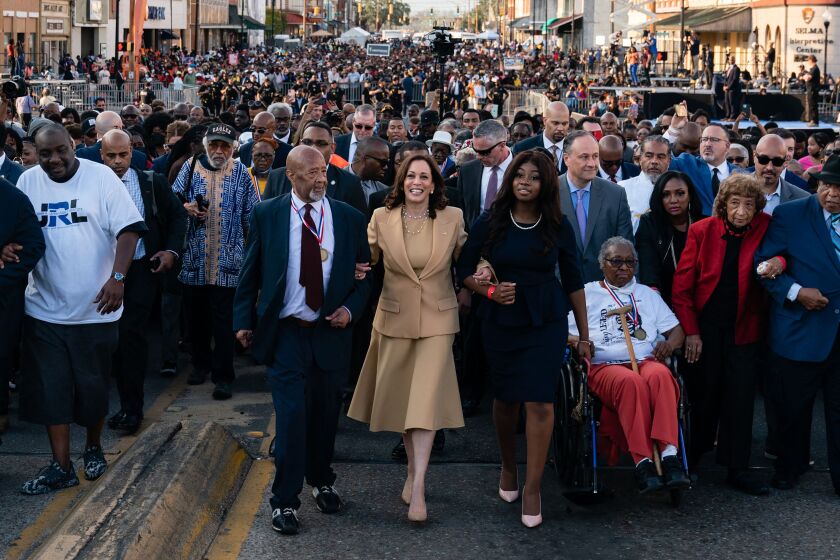 Vice President Kamala Harris, center, marches across the Edmund Pettus Bridge heading out of Selma, Alabama to commemorate the 57th anniversary of ‘Bloody Sunday,’ when voting and rights activists were attacked on the bridge on Mar. 7, 1965.Elijah Nouvelage/AFP via Getty Images

Politicians for both parties loudly praise the courage of Ukrainians defending their democracy from the Russian invasion. Yet, bipartisan defense of democracy disappears when the question is democracy at home. Mar. 7 marked the 57th anniversary of “Bloody Sunday” in 1965, when the police attack of a peaceful march of Blacks seeking the right to vote in Selma, Alabama, stirred the outrage that led to passage of the Voting Rights Act.

Today the right to vote is once more in question. We witness the second great drive to suppress voting in American history. The first came after the Civil War, when the constitutional amendment to free the slaves and guarantee the right to vote to African Americans sparked a vicious reaction across the South to enforce segregation and suppress the right to vote.

Today, Republican politicians are making it harder to vote, particularly for those in urban areas, on Native American reservations and on college campuses. In July 2021, the Brennan Center reported that lawmakers had introduced at least 389 restrictive bills in 48 states in the 2021 legislative sessions, while 17 states enacted 28 new laws that restrict voting access.

Partisan gerrymandering has been given a free pass by right-wing judges on the Supreme Court. Worse, election officials are under assault. One in six have received threats of violence; one in three say they feel unsafe. As President Joe Biden declared, “We’re facing the most significant test of our democracy since the Civil War.”

The reason for the assault is clear. After 2020, Republicans know that they are the minority and their prospects are getting worse with younger, more diverse voters. In the last presidential election, Donald Trump captured a stunning 74 million votes, but Joe Biden won 81 million.

When the House of Representatives took up legislation to revive the Voting Rights Act, what used to enjoy bipartisan support was passed, but with a partisan divide. Similarly, when the Senate considered the For the People Act to create federal safeguards on voting rights, limit the role of secret money in politics and rein in gerrymandering, Republican Sen. Mike Lee of Utah described it as a bill “written in Hell by the Devil himself.” Republicans used a filibuster to block passage of both bills.

The anniversary of Selma reminds us of how democracy is defended. Southern senators blocked any reforms at the federal level for years. In the states, police and organized terror enforced the suppression of Black votes.

African Americans won the right to vote because we and our allies marched for it, demonstrated for it, were beaten and died to gain it. And finally, after Selma, people of conscience demanded that the country live up to its Constitution and its democratic ideals. That is when President Lyndon Johnson could overcome the filibuster and pass the Voting Rights Act.

If the new voter suppression effort is to be overcome, it won’t come from the White House or Congress. The Justice Department will do its best, but will face obstruction from right-wing judges. In states controlled by Republicans, the onslaught is brazen and clear.

What is needed now is massive, unrelenting, passionate organizing to register people to vote and to get them to the polls. Mobilized people won’t be intimidated. With organization, the tricks and traps passed to suppress the vote can be overcome. Workers will have to sacrifice if early voting hours are restricted. Urban voters will have to put up with long lines, since polling sites are being eliminated. Mail-in ballots will face more obstacles. College students may need to organize the ID needed to qualify to vote on their campuses.

At stake is the direction of the country. Republicans have voted against raising the minimum wage, paid family leave, support for families with children, affordable day care, affordable prescription drugs, and fair taxes on the rich. They oppose action on catastrophic climate change. They vote against reproductive choice, civil rights, environmental and worker protections. They oppose tuition-free college and student debt relief.

All of these are supported by the vast majority of Americans. So, Republicans try to make voting harder.

We don’t have to risk the bullets of the Ku Klux Klan or the billy clubs of Southern sheriffs as the marchers of Selma faced. We do have to organize to make our voices heard and our votes cast and counted. Historically, the core of the reform majority — African Americans, Hispanics, single women, the young — turn out in smaller numbers in off-year elections.

We can’t afford that this year. At stake is literally what kind of country we will live in.