The original arrest warrant for Carolyn Bryant Donham should be served. Justice demands she not evade accountability in Till’s lynching. 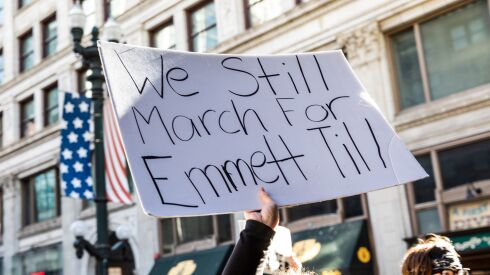 A woman holds a sign in honor of Emmett Till during a protest on June 13, 2020 in Chicago. Natasha Moustache/Getty Images

“The wheels of justice turn slowly, but grind exceedingly fine,” goes the saying. For the brutal killing of Emmett Till in 1955, just how fine those wheels will grind remains to be seen even to this day.

Emmett Till was a 14-year-old boy growing up in Chicago. In 1955, he traveled to Money, Mississippi, in the Mississippi Delta region to visit with relatives. His mother warned him before he left to show respect and deference to whites in those days of segregation and virulent racism.

In Money, Till apparently encountered a 21-year-old married white woman, Carolyn Bryant Donham, in the local family grocery store. She claimed that the 14-year-old grabbed her and tried to molest her. She said she yelled for help in the little store, but no one ever testified to hearing her screams.

In Mississippi, however, justice went AWOL. Roy Bryant and Milam were arrested and indicted for murder. In September 1955, they were tried before an all-white, all-male jury — women and African Americans were excluded. Despite overwhelming evidence of their guilt, they were acquitted in little more than an hour. One juror said if they hadn’t stopped to drink cola, the verdict would have come much quicker.

A few months later, Bryant and Milam admitted to murdering Emmett Till, selling their story to Look Magazine for $4,000. They were never held accountable for their actions. According to historian Timothy Tyson, Carolyn Bryant Donham later recanted her story, admitting that she lied about Till accosting her. Then she later disavowed that recantation.

A case that spurred an entire generation

Although a warrant was issued for her arrest in the murder, it was never served. She initially claimed she knew nothing about the kidnapping. Recently, her memoir was found and in it, she admits to knowing about the kidnapping, saying that when her husband and Milam brought Till back to her house she tried to help him by saying that he’s not the one. Then she alleged, fantastically, that Till, who had been dragged from his bed in the middle of the night, then spoke up and identified himself as the culprit.

What’s clear is that she knew and was involved in the kidnapping. Her family is calling on Mississippi and the Department of Justice to arrest and try her. Her false allegations led directly to the murder, which she helped to cover up. She is the only living accomplice to the crime. Justice remains to be done.

Till’s brutal murder, and the acquittal of the murderers, outraged people of conscience across the country. The Montgomery bus boycott continued until segregated buses were ruled unconstitutional.The outrage contributed to the pressure that led to the passage of the Civil Rights Act of 1957 authorizing the Department of Justice to intervene in local law enforcement when individual civil rights are trampled.

Till became a spur to an entire generation of young people, with thousands joining drives to register voters and to break the hold of segregation and terror on African Americans in the South. The injustice resonates to this day. Only this March, after decades of congressional inaction, Congress passed and President Joe Biden signed the Emmett Till Anti-Lynching Act, making lynching a federal crime.

The reaction to Emmett Till’s brutal lynching has helped make America a more perfect union, and helped free the South of the American version of apartheid. Yet, justice has not yet been done. The perpetrators have not been held accountable.

Now, with the uncovering of the original arrest warrant for Carolyn Bryant Donham and her own memoir confessing to her involvement, simple justice demands that the warrant be served and she not evade accountability.