Leaked opinion in Roe is a call to mass action

Alito’s draft decision not only rolls back women’s right to control their bodies, it also calls into question the right to privacy and other precedents. 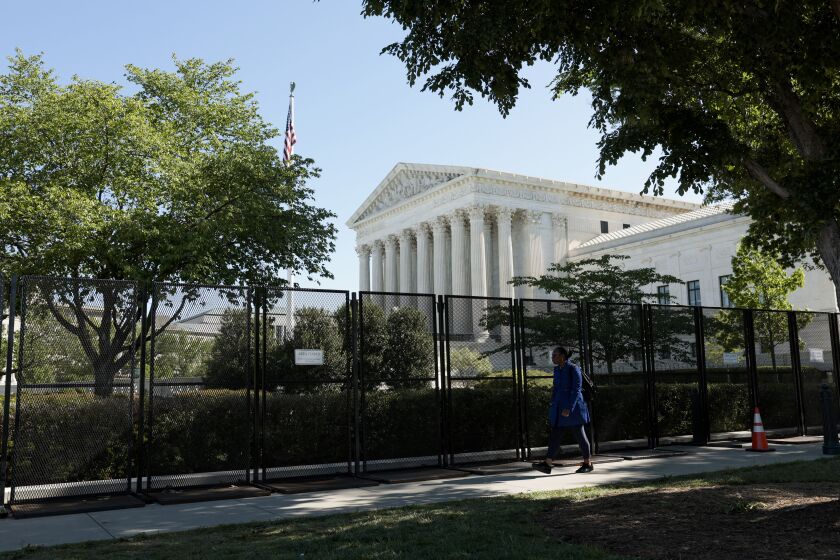 A pedestrian walks past the U.S. Supreme Court Building, now behind fencing and barricades, on May 9 in Washington, D.C.
Anna Moneymaker/Getty Images

Supreme Court Justice Samuel Alito’s draft decision to overturn Roe v. Wade asserts that women have no constitutional right over their own bodies that man or law must respect.

This arbitrary opinion in the case of Dobbs v. Jackson Women’s Health Organization, part of the brazen effort of reactionary judges to roll back decades of progress toward a more perfect union, scorns the will of the vast majority of Americans.

That the Supreme Court now convenes huddled behind concrete bunkers and unscalable metal fences is testament to the fury that this judicial wilding has already sparked.

The parallels to the Court’s Dred Scott decision in 1857 are chilling. In Dred Scott, a politicized court, in an opinion written by Chief Justice Roger Taney, ruled that African Americans were not citizens under the Constitution and therefore had no rights that a white man need respect, or that the federal government could protect. The decision contributed directly to the political divisions that culminated in the Civil War.

As with Alito’s draft, the Dred Scott decision was leaked ahead of time. As with Alito’s opinion, it was preceded by a disingenuous campaign to urge citizens to respect the decisions of the court as grounded in law, not politics.

In Dred Scott, Taney relied on a rigid standard of interpretation that ignored precedent and opinion. He argued that Black people could not be American citizens because at the time of the founding they were considered “beings of an inferior order ... and so far inferior, that they had no rights which the white man was bound to respect, and that the negro might justly and lawfully be reduced to slavery for his benefit.”

In Dobbs, Alito similarly adopts a rigid standard, arguing that the Constitution contains no words about abortion and that abortion was widely outlawed at the time of the founding. Of course, at the founding, women were not citizens, didn’t have the right to vote, and were treated largely as property of their husbands.

Taney believed that the decision would help temper the growing controversy over slavery that was dividing the nation. Alito suggests that overturning Roe will help reduce political divisions. Both were disastrously deluded.

Perhaps the greatest difference between Taney’s opinion in Dred Scott and Alito’s opinion in Dobbs is that Alito’s opinion is even more lawless and more brazen. He is overturning a precedent of 50 years that at least three judges in the majority agreed was “settled law” when they testified under oath in their confirmation hearings.

The Taney decision was directed at slavery. Alito’s decision not only rolls back women’s right to control their bodies, it also calls into question the right to privacy, and the precedents that have protected the right to marry whomever you choose, to use contraception, to have privacy in your home, to not be discriminated against on the basis of sexual preference and more.

After the Dred Scott decision, the great Black abolitionist Frederick Douglass denounced Taney’s reasoning as contrary to both the Constitution and the vision of the founders. He argued the decision would not stand: “I have no fear that the National Conscience will be put to sleep by such an open, glaring and scandalous tissue of lies.”

Similarly, Alito’s opinion, assuming it becomes the decision of the court, will spark fierce political battles. But it, too, will not stand, but be remembered only as a mark of ignominy.

We are not calling people to quietness, which is the absence of noise. Peace is the presence of justice. We must have mass action, litigation, legislation and registration. It’s not too late.