The French, like Americans, have rallied to a centrist candidate to reject the politics of hate and division. But that center will only succeed if fundamental reforms are passed to give working people hope. 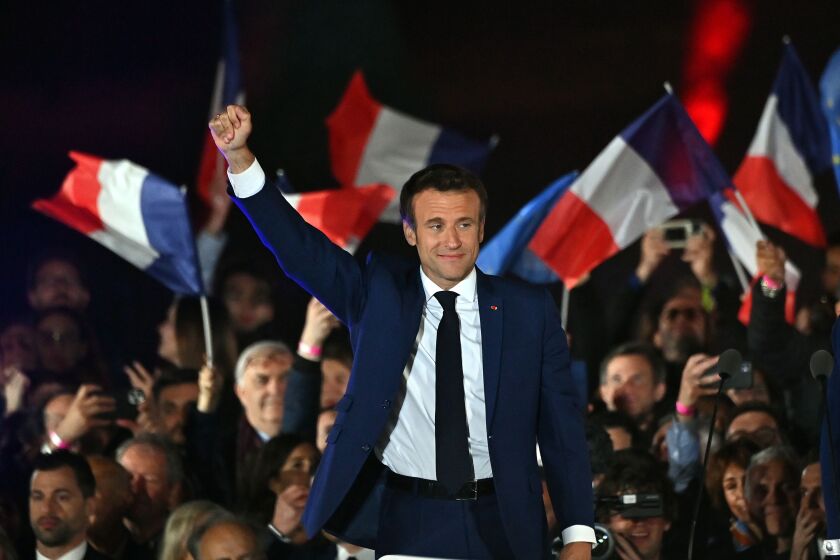 France’s centrist incumbent President Emmanuel Macron addresses voters in front of the Eiffel Tower after beating his far-right rival Marine Le Pen for a second five-year term as president with 58.8% votes on April 24, in Paris, France.

Vive la France. In Europe and the U.S., Emmanuel Macron’s victory in the French presidential elections elicited a huge sigh of relief. His victory margin, a 17-point defeat of the right-wing challenger Marine Le Pen, surprised most observers.

The stakes were significant. Le Pen —a right-wing, divisive figure, a sort of French version of Donald Trump — tried hard to soften her image in the campaign. She abandoned her previous pledge to take France out of the European Union. But she directed the anger of working class voters toward immigrants and Muslims. A Putin admirer like Trump, she favored a closer relationship to Russia, pulling France from NATO, and would have weakened the coalition opposing Russia’s invasion in Ukraine.

Recognizing the stakes, President Joe Biden congratulated Macron on his victory, tweeting that there would be “continued close cooperation, including on supporting Ukraine, defending democracy, and countering climate change.”

Contributing to Macron’s victory was his relative success in handling COVID-19 and accelerating economic and jobs growth. His basic decency contrasted sharply with his opponent. He was aided by voters to his left who, as the paper Liberation wrote, demonstrated their “political maturity,” and voted against Le Pen, despite “sometimes holding their noses.” Polls suggested that over 40% of Macron’s vote came from those voting to block the threat posed by Le Pen.

Despite the victory, the danger signs are apparent. Over a fourth of voters abstained, an abnormally high percentage for France. Le Pen apparently won a majority of working class voters who have suffered greatly from de-industrialization and declining prospects in an economy of greater and greater inequality.

The parallels with the U.S. political situation are striking. In both countries, the economy no longer works for working people. In both, inequality has soared, while good jobs have been shipped abroad. In both, demagogic politicians peddle an ugly right-wing fake populism. Centrist leaders like Macron and Biden offer decency and defend democracy, but in the end, democracy will thrive only if it serves the welfare of the vast majority.

As in the U.S., labor unions and progressive groups in France are pushing Macron to address France’s divide, urging him to focus on making the economy work for working people. Macron’s people, like Biden’s, say they got the message. Bruno Le Maire, the French finance minister, was quoted as saying, “We can’t forget the message they sent. We need to change our way of governing.”

Macron is promising what is called a “purchasing power package,” to increase pensions, raise social subsidies for families struggling with inflation and offer incentives to companies to lift wages. Whether he can move forward on this will depend on the results of the parliamentary elections in June.

Internationally, Macron’s victory will consolidate the alliance that is opposing the Russian invasion of Ukraine. But here too, real challenges remain. Efforts to stop the war must intensify as casualties mount. And popular support will surely flag unless the economic dislocations - particularly the rising prices of fuel and food - are handled successfully.

A centerpiece of Macron’s agenda is concern about climate change. Ukraine has pushed that existential threat off the front pages, even as scientists have issued new warnings and calls for action. Hopefully, as Biden suggests, Macron can join in helping to launch a new push on this real security threat.

The French, like Americans, have rallied to a centrist candidate to reject the politics of hate and division. But that center will only succeed if fundamental reforms are passed to give working people hope. Either there will be real reforms to redress growing inequality or the threat to democracy posed by those peddling hate and division will grow. The French in this election, like Americans in 2020, chose hope over hate. Now Macron and Biden must produce. Winning the election is but the first step. Now the real work begins.