Congressional Republicans are about power, not being moral or rational. They have to be taken on and taken out politically. 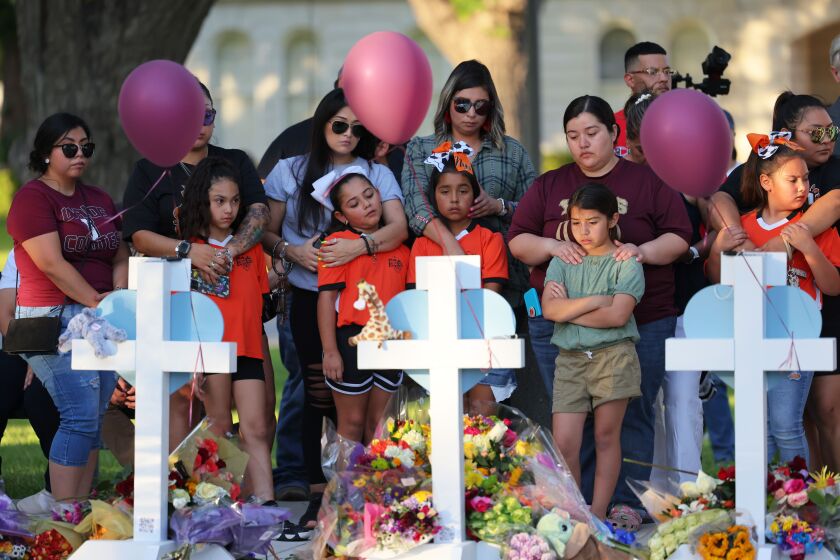 People visit memorials for victims of Tuesday’s mass shooting at a Texas elementary school, in City of Uvalde Town Square on May 26, 2022 in Uvalde, Texas. Nineteen children and two adults were killed at Robb Elementary School after a man entered the school through an unlocked door and barricaded himself in a classroom where the victims were located. Getty

This time it was a mass shooting in Uvalde, Texas, of 19 mostly fourth-grade students, along with two teachers, killed by a young man who had just turned 18 and bought himself a gift of two high-powered military weapons designed to kill people in war and 375 rounds of ammunition, which he used to shoot down his victims like rabid dogs.

The red and blue teams immediately jumped to their customary positions. The red team in the past blamed young people for watching too many violent video games. Now mental illness seems to be the red team’s dominant rationale. And their solutions range from arming teachers to hardening schools and many other ideas in between.

What’s the red team’s strategy? Look over here! Look over there at any shiny object other than we live in a country where citizens own more than 400 million guns in a population of 330 million, with a long history of violence growing out of an ideology of white supremacy over racial minorities — Native Americans, African Americans, Hispanics, and Asians. Some whites are now advocating, expecting or preparing for another civil war, much of it based on a racist “white replacement theory.”

The blue team mostly advocates for H.R. 8, a fairly comprehensive common-sense gun regulation proposal passed in the U.S. House but sitting on Senate Majority Leader Chuck Schumer’s, D-New York, desk because Republicans are universally opposed — possibly along with Democrats Joe Manchin, D-W.Va, and Kyrsten Sinema, D-Ariz. — and because it requires 60 votes or an end to the filibuster. It will never pass in this Congress.

Democrats are being un-political because they are still trying to persuade Republicans to support common-sense gun legislation through moral persuasion and rational arguments. Senate Minority Leader Mitch McConnell, R-Ky., and Senate Republicans are not interested.

The only “replacement theory” Democrats should be advancing is replacing members of the red team with members of the blue team. This group of congressional Republicans is about power, not being moral or rational. They have to be taken on and taken out politically — defeated and replaced.

What should be the Democratic strategy? There will likely be many motivating events and issues that should inspire Democrats to go to the polls for the Nov. 8 midterm elections.

The Supreme Court may play a big part in this regard as early as June. The court may overturn Roe v. Wade and galvanize women voters. It may upend or weaken affirmative action and activate racial minorities and women to rush to the voting booth. It likely will declare a New York gun law unconstitutional, opening the door to a national policy of “open carry” and awakening gun regulation advocates to vote in record numbers.

But to make sure greater gun safety and common sense gun laws — supported by up to 90% of the American people — are on voters’ minds in November, Democrats must do the following.

Break up the dozen or more individual parts of a comprehensive package of gun safety legislation — e.g., an assault weapons ban, background checks, red flag law and more — and make the House and the Senate members vote on them individually. There should be coordination between House Speaker Nancy Pelosi, D-Calif., and Schumer in the Senate. The House should vote on Tuesday and the Senate on Thursday, on one issue at a time, one a week, week after week, all the way to November.

It’s possible one of them may actually pass. That would be good news and start us down a path of greater gun safety. But strategically, put it at the beginning so that the closer we get to Nov. 8, voters will mostly remember all the “no” votes cast by Republicans on common-sense gun laws that would make the American people safer.

Democrats must stop being naive about negotiating with Republicans over guns because their strategy is to delay, divert, deny and defeat Democrats in November. Democrats must flip the table.

Next Up In Commentary
Ban on menthol cigarettes is the wrong move
Video shows ex-top cop getting walloped by paintball, collapsing to ground
Creating ‘Din City’ anywhere along Chicago River is wrong move
Bees work for us. They need our help.
Even in death, Monty sheds light on piping plovers, conservation
Politicians should resist rush to ‘do anything’ in response to school shootings
Most Read
Man jumps to his death from 16th floor of Trump Tower, police say
51 people shot over Memorial Day weekend in Chicago, the most violent in five years
Chicago police officer shot and seriously wounded while trying to stop car in Englewood
Johnny Depp wins defamation lawsuit against Amber Heard; jury also rules in favor of her counterclaim
Lincoln Park H.S. student threatened to shoot a teacher, but CPS declined to press charges, police say
Spread the Word!
Sign in if you'd like new recruits to be credited to you.
Share
Tweet
Email