Brandishing guns has long been a widespread symbol for gun lobby candidates intended to demonstrate their machismo. Now symbolic gun violence is the next stage. 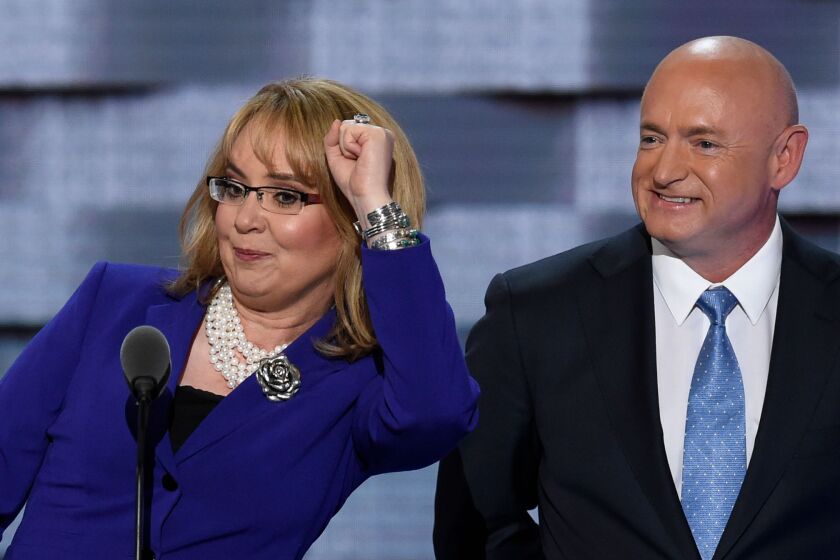 Gabby Giffords and her husband, U.S. Sen. Mark Kelly, D-Ariz. Giffords was severely wounded in a 2011 assassination attempt. Kelly’s opponent, had hoped to run an ad during the Super Bowl that showed Lamon drawing on and shooting guns out of the hands of Kelly, President Joe Biden and House Speaker Nancy Pelosi. Getty

There is no other word for the political ad launched by Jim Lamon, a politician running for the Republican nomination in the Arizona Senate race to challenge sitting Sen. Mark Kelly.

The ad — which Lamon’s campaign had announced would be shown during the Super Bowl — depicts Lamon in a Wild West shootout, drawing on and shooting the guns out of the hands of Kelly, President Joe Biden and House Speaker Nancy Pelosi, who then are depicted running away.

When I saw the ad on CNN, I called on the NFL and NBC to reject airing the ad during the Super Bowl — and as far as I know, they chose not to do so . The ad did run locally in Tucson during the big game. An apology from Lamon is owed to Kelly, but it is unlikely to be forthcoming.

Kelly is the husband of former Rep. Gabby Giffords who survived an assassination attempt in 2011, in which she suffered a fractured skull from a shot to the head. Six people died and 13, including Giffords, were wounded by a shooter weaponized by anti-government hatred.

Somehow even knowing that, Lamon and his campaign cooked up this ad to get maximum attention. When criticized, Lamon just doubled down, scorning “left-wing snowflakes.” Have you no decency, Mr. Lamon, no sense of shame?

Kelly, who is up for re-election this year, needs no high-paid PR guys, cheap rhetoric or fake shootout scenes to bolster his manhood. He was a Navy captain and NASA astronaut, who won his Senate seat in a special election in 2020.

Ads like Lamon’s are designed to make an impression — and that’s what makes them dangerous, as well as disgusting. Our society is now deeply polarized. Political rhetoric is getting more and more vicious, with personal attacks, insults and jibes becoming routine. Newt Gingrich rose to be Republican speaker of the House instructing his colleagues to use personal insult and slurs to “define” their opponents. After Donald Trump, a fierce competition arose to prove who was the most willing to hurl an insult, slur a name, display hatred and contempt. Another Republican candidate for Senate, for example, planned to air a commercial using the phrase “Let’s Go Brandon,” the insider phrase that means “F—- Joe Biden.”

Brandishing guns has long been a widespread symbol for gun lobby candidates, intended to demonstrate their machismo. Now symbolic gun violence — putting an opponent’s face in a target, shooting at bottles, slurring a candidate’s positions and now drawing on opponents — is the next stage. Most of the candidates are Republicans, but some Democrats do the same. Multi-millionaire Joe Manchin proves he’ll “defend West Virginia” in an ad where he uses a bill that would limit fossil fuel production for target practice.

This takes place in a country that has more guns than people. A country where gun murders are rising, and more than 45,000 people lost their lives to gun violence in 2020, the last year on record. A country that suffers the greatest annual civilian casualties from guns of any advanced country in the world.

Ads designed to leave an impression. A country armed to the teeth. Racial tensions rising. Impressionable onlookers hooked into bizarre conspiratorial nightmares. This is a recipe for violence.

Too many Republicans have become party to peddling hate, not ideas. In 2020, the party itself chose not to publish a platform, saying it would stand for whatever Trump wanted. Going into 2022, Senate leader Mitch McConnell admits Republicans have no platform, they are merely against Biden and Democrats whom they slander as socialists, traitors, cowards and more. Most have lined up behind Trump’s big lie that the election was stolen.

Now their ad guys are churning out ads arming politicians with guns to prove that they are just down-home fellows.

This won’t stop until voters make it clear that this is unacceptable. One good way to start would be for someone decent to win the Republican nomination for Senate, removing Lamon from the public platform he has so callously abused.