The state will hold the Buffalo shooting suspect accountable for this act of terror. The politicians and propagandists propagating the lies and the hate surely won’t consider themselves responsible. 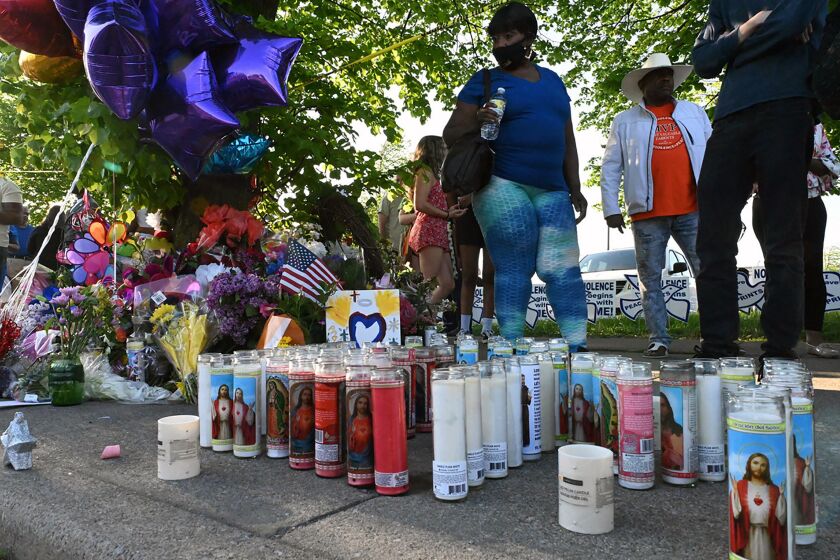 Candles, balloons and flowers are at a makeshift memorial near Tops Grocery store in Buffalo, New York, on May 15, the day after a racist gunman killed 10 people.
Usman Khan/AFP via Getty Images

When Payton Gendron, an 18-year-old white teenager, allegedly opened fire on shoppers in the Tops supermarket in Buffalo, New York, he knew exactly who he was aiming at: African Americans. Of the 10 people who were murdered and three wounded in the attack, 11 were Black.

The crime is murder; the motive was hate. The teenager identified himself as a white supremacist and a terrorist in a 180-page screed police recovered.The suspect repeatedly cited what is called “replacement theory,” a grotesque conspiracy theory circulating on the right that claims that Democrats and/or Jews are attempting to replace White Americans by importing non-white immigrants.

Gendron ironically lived in a community, Conklin, New York, with a population that is over 90% white and less than 1% African American. He chose to travel several hours to find the target for his hate.

The loathsome lie of replacement theory is propagated on the right by politicians and propagandists eager to profit by fanning racial fears and resentment.

It isn’t new. It was central to the motivation of the Ku Klux Klan after the Civil War when it unleashed a reign of terror on former slaves seeking to vote and exercise their rights under the Constitution. The plantation elite feared that Black voters would join with poor white farmers, take control and pass programs for free public education, land redistribution, a decent wage and workers’ rights. Klan terror was designed to intimidate Blacks. The big lie about replacement was designed to mislead and divide white workers.

The lie has persisted in various forms for decades, particularly after the Voting Rights Act was passed and Blacks began to register and vote in larger numbers.

In recent years, as with too many of the lunatic conspiracies of what used to be the wing-nut right, it has been adopted by leaders of Donald Trump’s Republican Party and right-wing media commentators.

Elise Stefanik, the third-ranking Republican in the House, who comes from the Buffalo area, has not hesitated to charge that Democrats are purposefully seeking to use immigrants to win elections. Tucker Carlson, the leading right-wing commentator on Fox News, continues to propagate the lie — dismissing any criticism as “hysterical” — since he asserted last year that the Democratic Party is trying to replace the current electorate “with new people, more obedient voters from the Third World.”

This loathsome lie is toxic, designed to stoke racial fears. It is also insidious and cynical, seeking to direct the anger of those who have watched plants close and communities suffer away from the CEOs and politicians who are responsible, and toward African Americans, Hispanics and other immigrants who also suffer the loss.

The charge is laughable. But, as Eugene Robinson writes in the Washington Post, do not laugh. “This paranoid fantasy killed nine Black worshipers at Emanuel AME Church in Charleston, South Carolina in 2015. It killed 11 Jewish worshipers at the Tree of Life synagogue in Pittsburgh in 2018. It killed 23 people, mostly Latinos, at a Walmart in El Paso in 2019. And now we have the carnage in Buffalo.”

The state will hold Gendron accountable for this act of terror.

The politicians and propagandists propagating the lies and the hate surely won’t consider themselves responsible, even though they know the lies they spread are false and dangerous. Political arsonists like Carlson and Stefanik and their ilk will keep fanning the flames so long as they appear to profit commercially or politically.

When the Klan spread its bile and its terror after the Civil War, it succeeded. The coalitions between Blacks and poor farmers split apart. Blacks were terrorized and driven from the voting booth. The resurgent plantation elite imposed segregation — legal apartheid — across the South for another 100 years.

And as the Buffalo murders show once more, now is the time.