What’s needed now is a PUSH for peace

If the war can be stopped, new efforts will be needed to ensure that Europe seeks security not in a new arms race, but in a new effort to build the structures of peace. 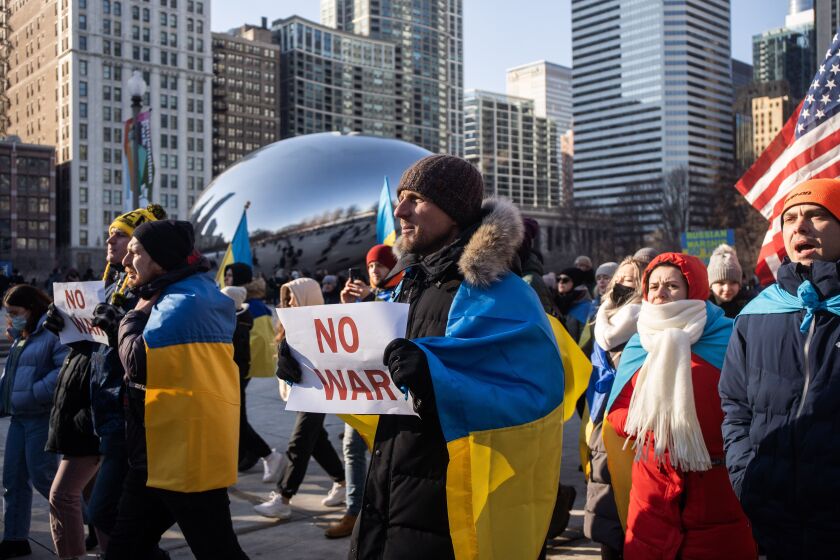 Hundreds of Ukrainian Americans and their supporters march at Millennium Park in the Loop on Saturday to protest Russian President Vladimir Putin’s invasion of Ukraine.Pat Nabong/Sun-Times

“When elephants fight, it is the grass that suffers,” an old African proverb teaches. Sadly, we now witness its truth in the horrors visited upon Ukraine by Russia’s invasion. The elephants — Russia and the U.S. with its NATO allies — fought over Ukraine, and now Ukrainians are paying a horrible price.

As in any modern war, civilians suffer the worst casualties. Nearly 400,000 Ukrainians have already been forced from their country, refugees fleeing the violence. While sanctions may hit the Russian elites in their pocketbooks, it is young, often befuddled Russian soldiers whose lives are at risk in the face of the inspired and fierce Ukrainian resistance.

Although Ukrainians suffer the brunt of the violence and destruction, “the grass suffers” across the world. Home heating and gas prices are spiking, as the war and sanctions constrict Russian supply. Food prices will soar, particularly in the Middle East and northern Africa, as wheat exports from Ukraine and Russia are disrupted. Rising prices will hit the poor and the weak first and hardest.

The Russian invasion and the brave Ukrainian resistance have set off two separate currents. The U.S. and European governments are rushing to supply weapons to Ukraine. In Europe, Germany has announced a massive increase in military spending, and a commitment to rebuild its military forces, which surely will be followed by others. Calls for adding to the Pentagon’s budget — already at levels that exceed in real dollars where it was under Ronald Reagan at the height of the Cold War — have already begun. Economic sanctions to isolate and punish Russia are ramping up. Russian President Vladimir Putin has responded by putting Russia’s nuclear forces on high alert, moving a step closer to the unimaginable.

Once begun, war has its own momentum. Clearly surprised by the Ukrainian resistance, Putin is reinforcing the invading forces, with Belarus announcing that it will send soldiers into the fray. Russian soldiers are massed outside of Kyiv, preparing to attack the Ukrainian capital. Ukrainians gain more arms and aid with each passing day. Russia’s presumed hope that it could topple the Ukrainian government quickly has been frustrated. The prospects of an extended, bloody and painful occupation have increased.

What’s needed now is a push for peace. As this is written, government delegations from Ukraine and Russia meet for “unconditional discussions.” At this stage, with troops in the field and blood on the ground, negotiations are difficult. To avoid the appearance of defeat, Putin will demand concessions. The justified rage of Ukrainians after the invasion will make any concession difficult. And in Europe and the U.S., hawks will argue against “rewarding” Putin for his invasion. But if there is no peace, then Ukrainians will continue to suffer.

It is vital that the voices for peace — the demonstrators, the voices of conscience, civic, religious, artistic and intellectual leaders — continue to grow in volume and urgency.

A cease fire is the first step. Negotiations that address both Putin’s fears and Ukraine’s independence are vital. And if the war can be stopped, new efforts will be needed to ensure that Europe seeks security not in a new arms race, but in a new effort to build the structures of peace. As we have learned repeatedly, wars too often end in ways that plant the seeds for the next war. We must find a way to end this war to ensure that the elephants learn to live together so that the grass can flourish.