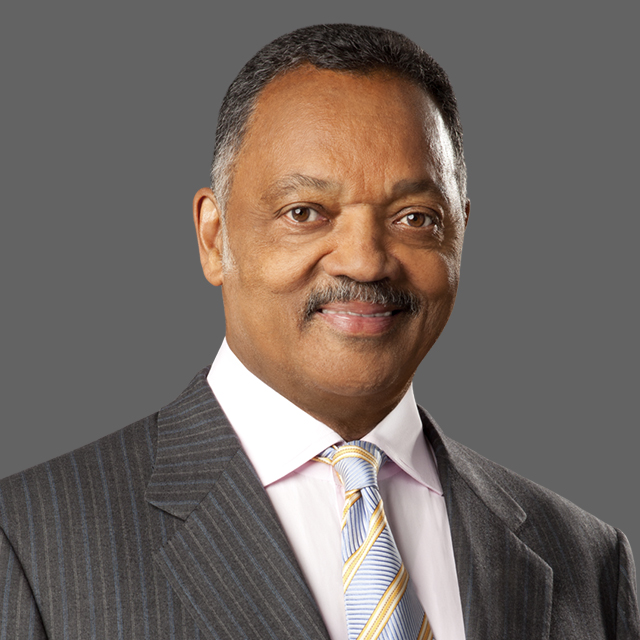 The Reverend Jesse Louis Jackson, Sr., founder and president of the Rainbow PUSH Coalition, is one of America’s foremost civil rights, religious and political figures. Over the past forty years, he has played a pivotal role in virtually every movement for empowerment, peace, civil rights, gender equality, and economic and social justice. On August 9, 2000, President Bill Clinton awarded Reverend Jackson the Presidential Medal of Freedom, the nation’s highest civilian honor.

Reverend Jackson has been called the “Conscience of the Nation” and “the Great Unifier,” challenging America to be inclusive and to establish just and humane priorities for the benefit of all. He is known for bringing people together on common ground across lines of race, culture, class, gender and belief.

Born on October 8, 1941 in Greenville, South Carolina, Jesse Jackson graduated from the public schools in Greenville and then enrolled in the University of Illinois on a football scholarship. He later transferred to North Carolina A&T State University and graduated in 1964. He began his theological studies at Chicago Theological Seminary but deferred his studies when he began working full-time in the Civil Rights Movement with Dr. Martin Luther King, Jr. He was ordained on June 30, 1968 by Rev. Clay Evans and received his earned Master of Divinity degree from Chicago Theological Seminary in 2000.

For his work in human and civil rights and nonviolent social change, Reverend Jackson has received more than 40 honorary doctorate degrees and frequently lectures at major colleges and universities including Howard, Yale, Princeton, Morehouse, Harvard, Columbia, Stanford and Hampton. He was made an Honorary Fellow of Regents Park College at Oxford University in the UK in November 2007, and received an Honorary Fellowship from Edge Hill University in Liverpool, England. In March 2010, Reverend Jackson was inducted into England’s prestigious Cambridge Union Society. In April 2010, he was awarded an honorary doctorate from the University of KwaZulu-Natal in South Africa.

In October 1997, Reverend Jackson was appointed by President Bill Clinton and Secretary of State Madeleine Albright as “Special Envoy of the President and Secretary of State for the Promotion of Democracy in Africa”. In this official position, Reverend Jackson traveled to several countries on the African continent and met with such national leaders as President Nelson Mandela of the Republic of South Africa, His Excellency Daniel T. Arap Moi of Kenya, and President Frederick J.T. Chiluba of Zambia.

Reverend Jackson began his activism as a student in the summer of 1960 seeking to desegregate the local public library in Greenville and then as a leader in the sit-in movement. In 1965, he became a full-time organizer for the Southern Christian Leadership Conference (SCLC). He was soon appointed by Dr. Martin Luther King Jr. to direct the Operation Breadbasket program. In December of 1971, Reverend Jackson founded Operation PUSH (People United to Serve Humanity) in Chicago, IL. The goals of Operation PUSH were economic empowerment and expanding educational, business and employment opportunities for the disadvantaged and people of color.    Read More